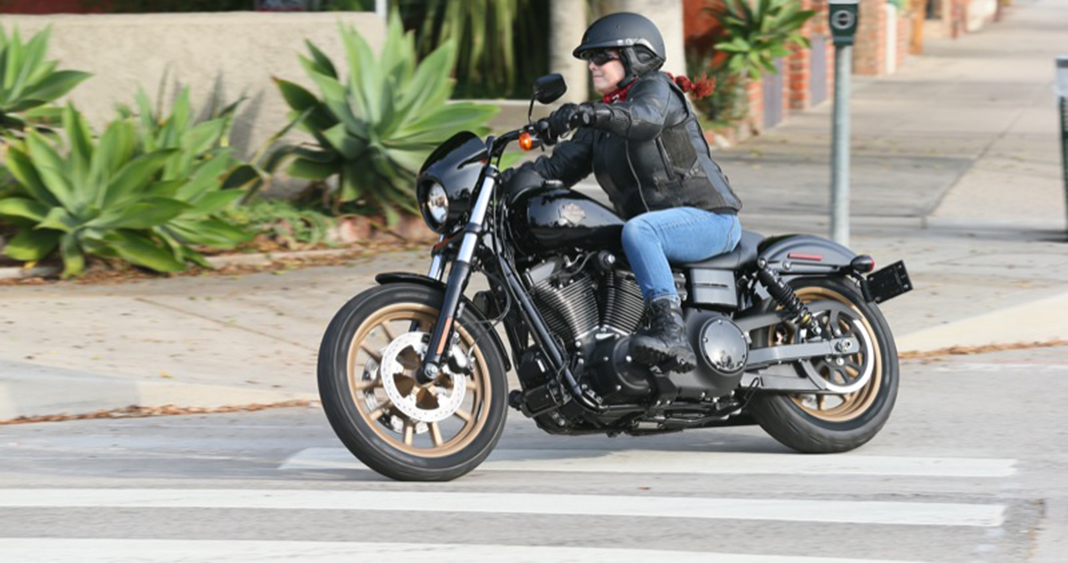 Los Angeles, Calif., Mar. 2–3—The row of 2016 Harley-Davidson Dyna Low Rider S models were fetchingly arrayed along the curb in front of The Garland in North Hollywood. Everyone in our group took a deep, collective breath. And then each of us proceeded to choose our partner for the day, some placing a helmet on the handlebars or jacket on the seat to reserve our favorite, which was kind of amusing because all 10 bikes were identical. To paraphrase Henry Ford’s famous quote, “You can have any color as long as it’s black.” Vivid Black, that is. Harley-Davidson wants no misunderstandings about the Low Rider S. This bike means business.

The first two entries into Harley’s new “S” model line, the Softail Slim S and the Fat Boy S, were introduced with the rest of the 2016 lineup in August, 2015. All S models are limited-edition cruisers featuring the Screamin’ Eagle Twin Cam 110” motor, previously available only in CVO bikes, mated with Harley’s 6-Speed Cruise Drive transmission. Third in the line of S-series cruisers is the Dyna Low Rider S, unveiled to the public at X Games Aspen on January 27. The FXDLS is the most powerful model ever offered in the Dyna family, which partially explains why this mid-year model was accorded its own press launch.

And what an affair this press launch was, thanks to Harley-Davidson U.S. Media Relations Manager Jen Hoyer. Every aspect of the event was flawless, and specifically geared toward providing us media types with the optimal conditions to experience the abilities (and agility) of the Low Rider S. Our destination? Newcomb’s Ranch, a biker-friendly roadhouse that sits atop the peaks of the San Gabriel mountains, more than a mile above sea level.

Before the ride, an FXDLS features overview was presented by Harley-Davidson staff, including Jen Hoyer, Motorcycle Product Planning Director Paul James, and members of the design and styling teams. One thing made apparent was that the S series motorcycles were designed based on customer feedback, which included the desire for a chrome-less, raw, blacked-out look, the biggest H-D engine available at an affordable price, and premium riding suspension. Paul James commented, “It’s the classic hot-rod move; drop a bigger motor in a cruiser and let the chips fall where they may.” Paul is a racer and has directed and strategized for Harley-Davidson racing programs, so when he talks about anything motorcycle, I tend to listen.

One of the biggest challenges for the design team was to come up with something new and relevant to Harley’s customers, while staying true to The Motor Company’s legacy. The target audience for the Low Rider S is the 18–34 age range, although it’s expected that many “core” customers (35–55) will find this bike appealing as well. Harley-Davidson projects that 60 percent of this model, limited to a 10,000-bike production run, will be sold in the U.S. and 40 percent internationally.

The bike’s stripped-down appearance bespeaks its threefold mission—rawness, power and performance. Accompanying the Vivid Black paint treatment is a plethora of blacked-out finishes, both flat and wrinkle, found on nearly every other surface of the bike, barring a few chrome and aluminum finishes. The only splashes of color are the new 60’s Ferrari-inspired Magnum Gold lightweight split five-spoke cast aluminum wheels and the complementary gold tank badge that pays homage to the 1977 XLCR Café Racer. Other model-unique features include the Gloss Black Heavy Breather Performance Air Cleaner, blacked-out “Tommy Gun” 2-1-2 collector exhaust with dual mufflers, chopped rear fender with side-mounted license plate bracket, and a new Gloss Black headlamp recessed behind a compact “speed screen” fairing, which is intended to give the bike a rather intimidating look. ABS brakes and security system are standard on this model, and the FXDLS is the very first Dyna with electronic throttle and electronic cruise control.

My first impression when I finally got to sit on the bike was that it fit me. And fit me well. The ease of lifting the bike off its kickstand belied its 674-lb. curb weight, and the seemingly low center of gravity was evident throughout every maneuver, including the one where I lightly (so I thought) tapped the brakes and the high-performance ABS-boosted 4-piston dual-caliper brakes in front and 2-piston floating rotor in back startled me a bit with its instant response.

Because the new solo seat forces a somewhat aggressive riding stance, which is further enhanced by the 5.5” straight risers and flat drag-style handlebars, I found myself sitting on my gluteus maximus (a.k.a. “butt”) instead of balancing on my tailbone which is my usual position while riding other cruisers. The seat also contains a new type of foam that, along with the bucket-style shape, made for a surprisingly comfortable, lumbar-supportive ride, one that didn’t place undue pressure on my spine. I’m not sure how well one’s posterior would fare after a full day of long-distance highway riding, but the seat—and my butt—handled the day’s hundred-or-so miles with ease.

The combination of mid controls and forward-facing air cleaner works very well for someone of my stature (5’4”). Others in our group, a few of whom were at least 6’1”, were able to keep their right foot on the peg without pressing up against the air cleaner, and claimed they were comfortable in their riding position as well. However, I question whether taller, longer-legged riders would be able to fit a right leg behind the base of the air cleaner where it meets the throttle body.

Our initial foray, intended to familiarize us with the bikes, took us through the North Hollywood streets where we inadvertently got to test the suspension. The premium 49mm Showa single cartridge front suspension handled dips with very little front-end dive and took turns without wobbling, while the Premium Ride nitrogen gas-charged emulsion rear shocks with enhanced compression and rebound damping control made for an extremely smooth ride. Although the rear shock length and travel between the FXDL and FXDLS is the same, the Low Rider S front spring rate and rear preload are set for more aggressive riding. This also makes the Low Rider S seat height of 26.6” higher than the Low Rider with its 25.4” seat height, and the ground clearance of 4.13” is ever-so-slightly higher than the Low Rider’s 4.1”. The suspension was set and these figures were calculated for a 180-lb. rider, so your results may not be the same.

The console gauges appeal to my ergonomic sensibilities, and although I’ve gotten used to a single gauge that performs multiple functions (and which I do not like because of all the required switching to view the different displays) on my FLD, I appreciate the separate tachometer that is positioned below the speedometer. Analog rules! And that includes the fuel gauge in the usual position on the front left of the gas tank. That said, the speedometer display can be switched between that function as well as an odometer, tripmeter, miles to empty, clock, and… oh, joy! A gear position indicator.

Although I got a taste of the fast acceleration off the line during our in-town excursion, I was able to more fully experience the bike’s quick response when we hit the highway. The rapid pickup, which occurred all the way through the rpm range, is in part due to the electronic throttle, but the power has to be available to begin with, and this baby produces 115 ft/lbs of torque at 3500 rpm. Mileage is rated at 44 mpg, which is surprising for a motor this size, especially since the Low Rider at 103” is reported at 42 mpg. According to Harley-Davidson, the 110” is more efficient with the 2-1-2 exhaust than the 103” is with the 2-1 exhaust. And even the exhaust note on the FXDLS is rather pleasing; not obnoxious but not wimpy either. The bike also sports a heavy-duty clutch, but I had no problems pulling the lever to disengage and engage again.

Because of the low bars and aggressive rider position, I noticed that my steering input produced immediate results, serving me well in tight turns and twisties as well as setting up a nice rhythm for curving around the sweepers. The tight front and rear suspension helped keep the bike tracking in exactly the line I wanted, as well. And we got a good chance to further test the brakes; as we rounded a sweeping corner, there was a 45-foot rig parked crossways, blocking the entire highway. We had to pull a near-panic stop, which all of our bikes performed without skidding, shimmying or shuddering. The Michelin Scorcher “31” tires, designed especially for Sportsters and Dynas, wrapped around the 19” front and 17” rear wheels helped in that department too, along with providing a sure grip as we wove our way up and down the mountains.

Speaking of curves, that Low Rider S is a ton of fun! The suspension, handlebar positioning, rider stance, and well-balanced weight all combined to enable leaning the bike through the ascending sweepers without fear of losing control. Although the lean angle, at 27.5 degrees right and 28.5 degrees left, is two degrees less than the Low Rider (only because of the FXDLS’s dropdown pegs), I didn’t come near to scraping anything at all. A more aggressive rider will find good use for those pegs, but this bike’s lean angle falls about mid-spectrum if one considers every Harley model, and is quite adequate for my riding style. On the way back down the mountain, the twisties along the Angeles Crest Highway gave us further opportunities to test the limits of this nimble power cruiser.

The speed screen is designed to direct the wind away from your chest, which did seem to work somewhat, and again, its effectiveness may depend on your height. But once we descended from the mountain and hit the freeway, the wind at the higher speeds tried to lift up my open-face helmet (and no, it wasn’t a beanie helmet; it’s a snug-fitting DOT-approved one). The solution suggested to me was to wear a full-face helmet so the wind couldn’t get underneath it.

All my bikes perform long-distance touring duties and I’d want the FXDLS to be a capable highway traveler as well. The range for this bike is more than adequate—with its 4.7-gallon fuel tank, one could, depending on external conditions, achieve over 165 miles before the low-fuel warning light appears. But there are a few things I would do before setting out on a long trip. My sources at Harley-Davidson tell me it takes about a half hour to remove the speed screen and its support brackets, so in place of the speed-screen setup I would use one of the H-D detachable windshields that fit the FXDLS. Additionally, Harley offers luggage racks, sissy bars and hardware to fit the new chopped fender. And although the handlebar grips are nice and small, they’re not particularly comfortable for me, so I’d replace them with something a little cushier.

Many of the other parts that fit the Low Rider will fit this bike as well.

As a rider that has aged out of Harley’s core consumer demographic, I would still consider adding the $16,699 FXDLS to my Dyna stable, considering that I’d be getting a lot of the CVO features but for thousands of dollars less. In fact, Brad Richards, the Harley-Davidson styling director who participated in the press launch, has already ordered a Low Rider S for himself. He quipped, “I love my iPhone. It works fantastic, but as soon as the next iPhone comes out, I’m going to throw it in the landfill. But this Low Rider S I’ll probably hand down to somebody in my family.” Whether the FXDLS is a hit with riders remains to be seen, but it shows every indication of becoming a hot rodder’s bike of choice.