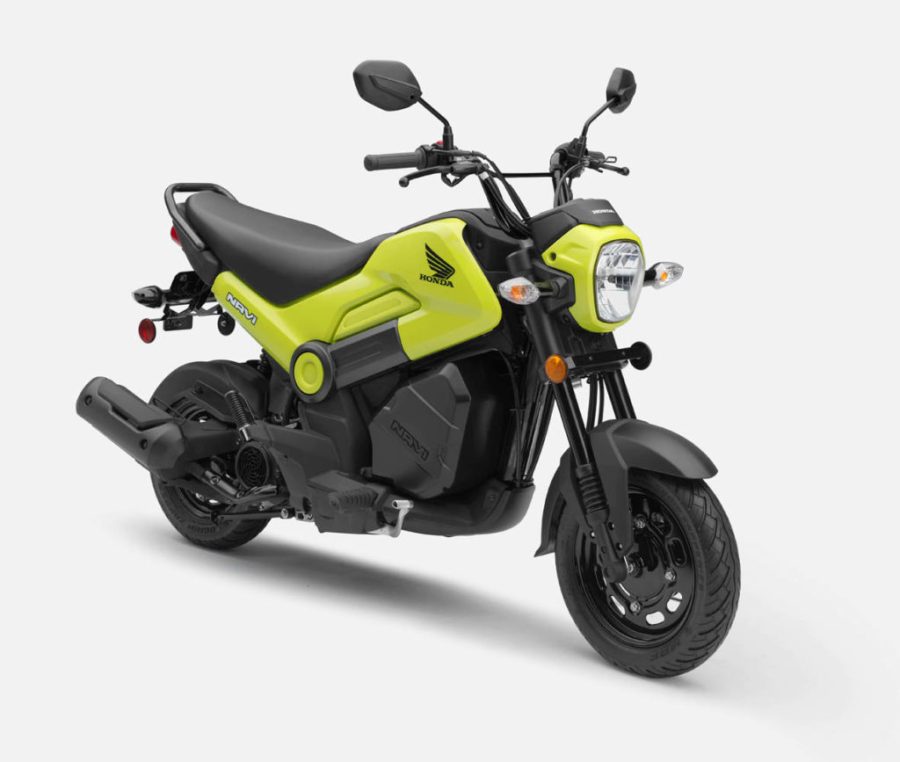 Earlier this year Honda updated two popular models in its miniMOTO lineup for 2022, the Grom and the Monkey. American Honda has announced that a new model called the Navi will join the family, and it retails for just $1,807.

Small, accessible, playful, and affordable (it’s less expensive than most electric bicycles), the Navi should appeal to a wide range of riders, especially those just learning to ride. It’s powered by a fuel-efficient, user-friendly 110cc single-cylinder engine with an automatic transmission, so there’s no clutch lever or shifter – just twist and go, like a scooter.

The engine is fan-cooled, uses eSP friction-reducing technology, has an OHC with two valves, and uses a carburetor to mix fuel and air. It has an electric starter with a kickstart backup. The V-Matic CVT (continuously variable transmission) uses an automatic centrifugal dry clutch, and power is sent to the rear wheel via belt drive.

Fuel capacity is just 0.9 gallon, but based on the EPA estimate of 110 mpg, range could be 99 miles between fill-ups.

The Navi’s modern, blocky styling is reminiscent of the Grom, and its seat height is just 30.1 inches. Weighing just 236 pounds, measuring just 50.6 inches between its axles, and rolling on 12-inch front/10-inch rear wheels, the Navi will be ultra-easy to maneuver and park, or load onto a rack behind a car, truck, or RV. There’s even a storage bin for stowing a few essentials. The Navi’s seat accommodates a rider and passenger, and passenger footpegs are standard.

“From the original Cub to the Grom, Honda has a proud legacy of producing miniMOTO models that open doors to new riders, and the Navi is set to extend that trend even further,” said Brandon Wilson, Sports & Experiential Manager at American Honda. “This miniMOTO checks all the boxes for new riders, like simple operation, a fun design, low operating costs and Honda reliability – all for well under $2,000.”

The Navi will be on display at this weekend’s Progressive IMS Outdoors motorcycle show in Costa Mesa, California, where it will also be among the models included in the Motorcycle Industry Council’s Ride With Us Moto Intro experience, giving new riders an opportunity to try motorcycling.

The 2022 Honda Navi will be available in January (February in California) in four colors: Red, Grasshopper Green, Nut Brown, and Ranger Green.

For more information or to find a Honda dealer near you, visit powersports.honda.com.